Winter Gardening and Life with God

I've just come in from the back what I like to call the vegetable garden area. Many years ago I created some raised beds in a back corner of the yard and they started out as a butterfly habitat area when there wasn't much other habitat in the yard to speak of. Over the years, as the yard plantings have expanded, the beds have served as an herb garden and a vegetable garden, though last year, I am sorry to say, my dachshunds managed to eat more of the produce than the humans did. Fencing the area will be a priority this spring.

Most years I have taken better care of putting the garden to bed than this year and this morning I was feeling considerable remorse for ignoring the soil that should be protected through the winter. Since the weather wasn't too cold or wet, this became the morning to take care of the long neglected chore of gathering my neighbor's piled up leaves and grass clippings and mulching the garden beds. The wheelbarrow and I made trip after trip gathering and dumping and though I took a break for a while, I knew better than to hope I'd finish it another day if I stopped for very long. Finally after a couple of hours in the wind I was satisfied with my work and called it a morning. Now when I venture out to the garden I'll picture all the soil microorganisms feeding on the plant material I put down and the beds being enriched by their efforts.

Somewhere along the line, while pushing the wheelbarrow filled with yet another load of dried grass and leaves, I thought about how I'd like my life with God to be similar to the garden task I had undertaken. I wasn't caring for the garden on this winter day because it was in crisis or because there was some extraordinary need. It was just a task that should have been done, a rather routine task really, particularly if it had been accomplished at the proper time instead of waiting until after Christmas. I was just doing what was necessary to ensure the health and fertility of the soil so that next growing season the garden will be as productive as possible. I think of cultivating my spiritual life in the same way. It is in my unremarkable daily interactions with God that we build the relationship that sustains me and from which I draw when I find myself in need. Lately my prayer has been that God will increase the presence of His Spirit within me, causing me see the world and the people in it through His eyes. I imagine the process is going to take even longer than the time needed to build and enrich the soil in my garden but just as in soil building, I do not see myself as the one who does the work. In soil building I bring in the organic material but it is the soil microorganism who do the work of enrichment. In the same way, as I bring myself to God, it is He who does the work of transformation in my heart and spirit. That work isn't something that I could ever hope to accomplish myself.

As so often happens, there are analogies between the natural world and life with God almost everywhere I look. The trick is to stop and pay attention and then to listen to what they have to say.
Posted by Ann at 11:24 AM 2 comments:

A Garden for All Seasons 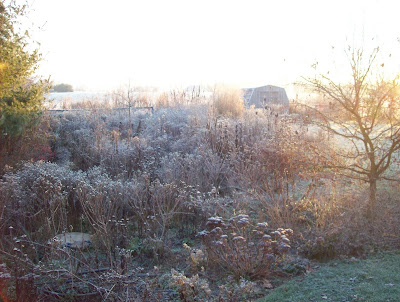 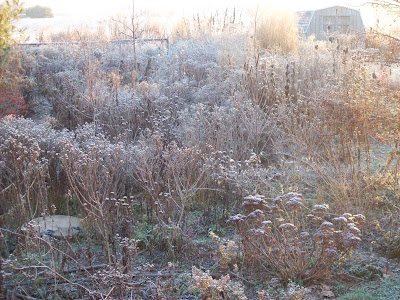 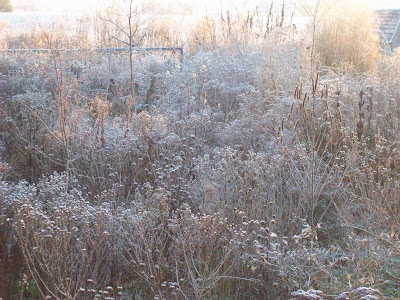 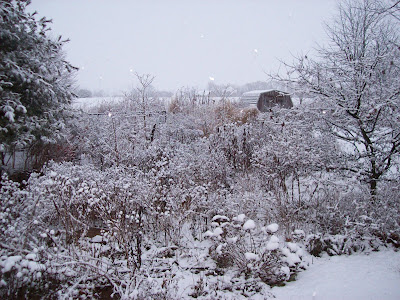 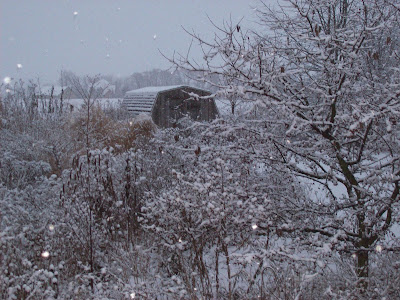 So often people seem to feel the need to cut down their gardens when the growing season ends and they must believe that dried seed heads, foliage and stalks serve no purpose. I would disagree and am offering these recently taken pictures of my garden as part of my reasoning. To be sure, winter gardens can seem untidy and unkempt at times. This I will concede and have to admit that by March I am more than ready to cut mine down as well. But now, at this time of year, when the frost and snow blanket the architecture of the garden, the sight can be almost as stunning in a black-and-white sort of way, as the full color of high summer. And when the chickadees, downy woodpeckers, goldfinches and pine siskins come in to eat on the standing plants and the white-crowned sparrows and juncos find numerous seeds on the ground below, the satisfaction in providing such a smorgasbord is rich indeed.
Posted by Ann at 8:41 PM No comments:

Thinking back to Christmas morning....In this case the presents were not something I asked for or would have even thought to ask for. It had been a full and bustling Christmas Eve and Christmas day overflowing with happy times with family and joyous conversations. We live in a small ranch house and the common area consists of a smallish kitchen/dining room combination and a living room. When that space is filled with a large Christmas tree, 7 people and 2 neurotic dogs stepping outside for some calm and fresh air can be a refreshing respite whether anything noteworthy is happening in the yard or not. This morning as the dark gave way to early light I was expecting to see the various sparrow species, cardinals, chickadees, goldfinches and woodpeckers that are here all the time and had good reason to hope for the flocks of pine siskens that have been visiting lately. But in addition to the familiar birds, I was greeted with the calls of a handful of cedar waxwings, sitting high up in the honey locust. Whether they stopped to eat at the crabapple tree before leaving again I do not know.

The most surprising outside gift of the day, however, was the presence of what I have called "The Christmas Pheasant". We have had pheasants in the yard now and then over the years, but never one so bright and beautiful and never on Christmas day. After all the kids had left for their next destinations, and my husband the same, I was in the process of taking the leftover wrappings out to the trash when a large male pheasant scooted away from me, just 15 ft or so from the back door. He puttered about the yard for the next hour or so and then sailed over the fence and was gone, leaving nothing but a delighted memory of his visit...such a glorious and unexpected present on this day of days. Immediately words from the old hymn (and remembered in the Godspell rendition) sprang to mind.

"All good gifts around us, are sent from heaven above. So, thank the Lord, O thank the Lord for all His love." A fitting reminder for heading into the new year and all it brings.
Posted by Ann at 8:12 PM No comments:

For those who are still checking this almost abandoned blog, I thank you. I figured everyone had given up on me ever having a noteworthy thought or post again and when I just looked at the blog statistics I saw that I had been wrong. So thank you.

I'll be writing again soon but not today. Today I am enjoying the fragrance of fresh Russian teacake cookies, peanut butter popcorn and berry candles. And listening to quiet reflective Christmas music and watching the many birds out in the yard feasting on the bounty there. There must be 50 pine siskens on thistle feeders and seed producing plants and a family of 6 or so bluebirds eating from the crabapples and winterberry bushes. There are white-crowned sparrows and juncos all over the ground, chickadees and titmice at the sunflower feeders, woodpeckers at the suet, and blue-jays coming in for peanuts in the platform feeder. The yard is like something out of Narnia at the moment... ice hanging from every branch and feeder. If the sun were out I'm sure all would glisten like jewels.

Today is a day to be thankful for Christmas coming, for remembering God's work in our world and for humbly accepting His grace and nearness. Writing can wait a bit longer.
A Merry Christmas to all who stumble upon these words and God's peace to you all.
Posted by Ann at 10:52 AM 1 comment: